Enjoy a magical twist on Solitaire in The Chronicles of Emerland Solitaire!

The Chronicles of Emerland Solitaire is a pyramid style solitaire game developed by Rainbow Games. In it, you take the role of a wizard’s apprentice as you learn about your powers and try to save the kingdom.

The game’s art style is straight out of a story book. The colors are incredibly vibrant, and the sound design and music give you a cozy feeling of never wanting to leave. While characters are not animated too much, they are fully voice acted, which helps greatly with immersion. Now, this being a solitaire game, you do have the classic deck of cards, but they are all stylized to fit the fantasy theme the game is going for. Even when cards have special effects, these are shown with great detail, making the game as much fun to watch as it is to play.

Save the world with the magic of solitaire!

In terms of the story, there is more here than one would expect from a solitaire game. As mentioned before, you are a wizard’s apprentice, using your cards to cast your magic. You are secluded from most of the world, training next to an ancient and magical tree. You are not only required to hone your skills, but also to take care of this tree as you practice. This is all reflected really well during gameplay, since you take breaks between your classes to take care of your learning area with some hidden object style gameplay (not the focus of the game, but a nice distraction). As the story advances, you and your master are challenged to stop a practitioner of dark magic from destroying the seals that hold the world together, thus you now must chase him across the land as he tries to stop you with different obstacles, and of course you will solve them with the magic of solitaire! 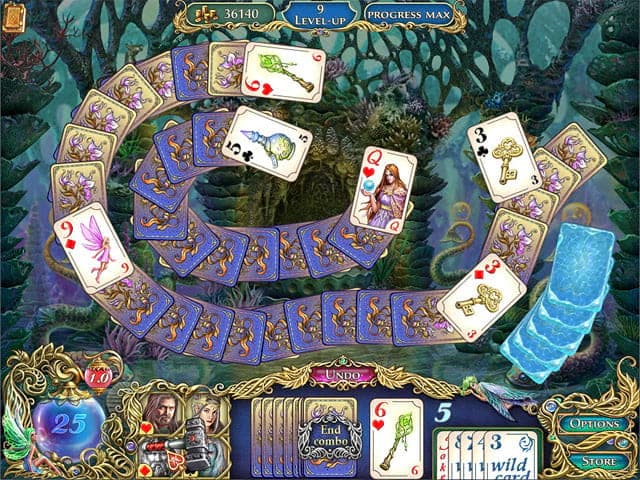 As for gameplay, there are quite a few layers to it, so let us start at the main attraction that binds them all together: Solitaire. If you have played the game before, you should know the rules are a bit different here, hence why it was mentioned previously that this is in a pyramid style. What matters most to match are the numbers, not the kind of card (hearts, diamonds and so forth), and you can only match them to the deck of cards that you have at the bottom of the screen. You choose a stage from a map given to you at the start of the game and interestingly enough, if you do not manage to get rid of all the cards, you simply get a low score but you get to continue along the map. You can, of course, replay any given unlocked stage as many times as you want.

To differentiate itself from other solitaire games, this one has some special tricks up its sleeve in the form of obstacle cards. These can be either obstacles or normal cards with something on them, and you must clear that before you can use them. If the card is locked, you must find the key hidden in the deck. If it is frozen, you have to use it twice (handy for combos). If they have a ribbon, you have to find scissor cards, and so on. So if you were afraid this was just going to be about one hundred stages of simple solitaire, think again.

As you beat stages, you make points that transform into coins, one of the game’s currencies. With them, you can buy power ups for the solitaire levels, which come quite in handy when you feel you have been dealt a raw deal. You can, for example, buy joker cards that can be used whenever you wish, allowing you to make difficult matches that were otherwise impossible. Or you can buy permanent upgrades, like increasing the ability to undo a move, or even to passively gain joker cards without having to buy them. 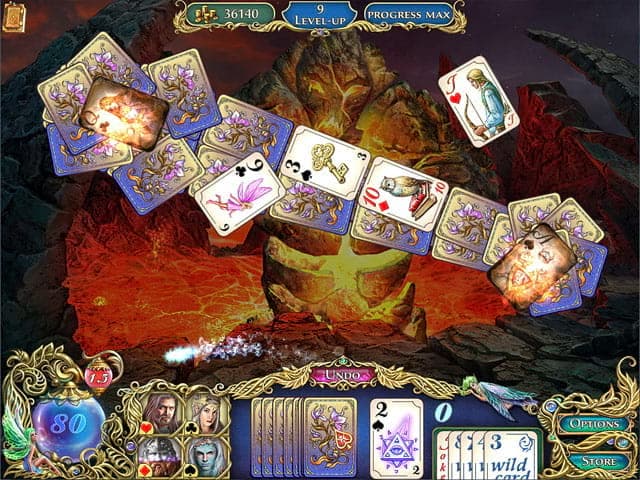 The Chronicles of Emerland Solitaire is a fun and surprisingly involved adventure that has the option to challenge you or to help you unwind from a long day, thanks to its difficulty settings. Even if you’ve never played this type of game before, you should definitely give this one a try.