Star Defender 4 is a top down shooting video game. In it, we take the role of a spaceship pilot in a solo mission to save the galaxy from hideous space dwelling insectoids.

This game is also reminiscent of various other arcade games, and it definitely evokes a sense of nostalgia!

As many top down shooters, Star Defender 4 uses a two dimensional art style. Each stage has a background image working as a backdrop, and plenty of enemies. These enemies are the space insectoids that we talked about before, and their ships seem to be alive as well, with gross details that leave little to the imagination.

While the setting is bleak and mostly dark, there are plenty of bright colors to be found here, both within the backgrounds, the ships and even the power ups. The backgrounds themselves are quite detailed, specially for a game set in space. While one might be forgiven for assuming the backdrops might be fully black, maybe with some stars dotted around, that is not the case. We tend to be in the thick of it, so to speak, always invading the space stations and motherships of the enemy; structures large enough to be used as background.

Enemies can even interact with said background, since we might find turrets coming out of the ground, or even ships planting bug eggs that we need to kill before they hatch. And of course, the bullets, both yours and the enemy's, are quite bright. This is necessary because you need to know if you are hitting somebody, and if somebody can hit you.

While the intricate backgrounds are pretty to look at, they can be quite distracting, therefore having the bullets pop up like that helps in the moment to moment gameplay.

And just what is that gameplay? Well, as we said this is a top down shooter, so your ship is in the bottom of the screen and you see the top of it. You move the ship from left to right with your mouse, one click does your regular shot and the other the special shot.

As you kill enemies, they might drop power ups for your shots. For the regular shot there is no ammo, you can shoot to your heart's content. These bullets range from higher damage output to wider rate of fire, and the strategy lies in sometimes skipping a power up in order to maintain your current bullet pattern.

For the special shots, they are dropped very much the same way, however they do have ammo, so you have to use them carefully. These shots are way more flavorful since they have a bigger impact compared to its normal version.

You can get missiles for heavy damage in a small area, a machine gun for quick damage in a large area, or even a small robot that gets attached to a single enemy; this last one is quite useful so you do not have to keep your attention on every single enemy.

Beyond these, there are other, temporal power ups. These are the most powerful ones yet they can not be saved for later; if you have it you have to use it. They include shields, lasers that are constantly going out and even small drones that auto target everything around you, giving you easy kills. Quite useful when in a pinch. 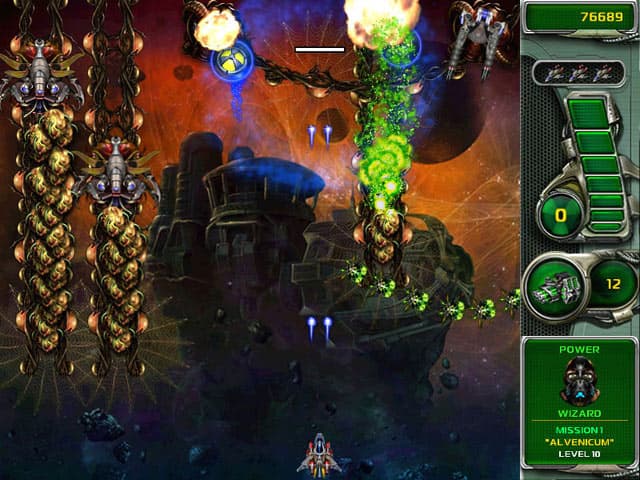 To win the game, you have to kill all enemies on the screen but mostly survive. If you get hit, you lose part of your health bar, and if that gets depleted, you lose a life. Lose all, and it is game over.

Luckily, gaining points and power ups can give back some of your health pool, and beating bosses gives you an extra life.

Speaking of bosses, there is one every ten levels, and they are quite the sight. Artistically speaking, they are quite intricate, with various moving parts. This is because you can not just shoot them as you please, you have to identify and target the weak points. Destroy every part of the boss to win. 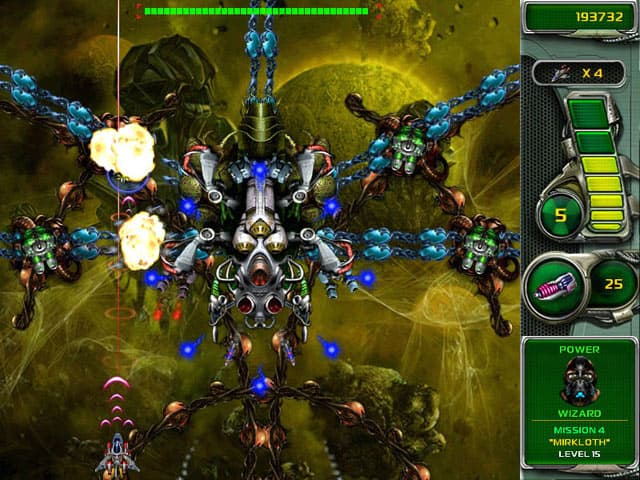 Star Defender 4 is an action packed title for people that want their fix of interstellar adventuring. It is very well made, and every stage will keep you on your toes. So get in, pilot, and stop those bugs from getting all over the galaxy.

If you enjoy these free games, you will love this list of our 10 Best Shooting Games!