Get spooked on the Solitaire board with Jewel Match: Twilight Solitaire!

Jewel Match: Twilight Solitaire is a solitaire video game with a spooky twist! It is a pyramid solitaire game, where the objective is to get all the cards from the pyramid to the foundation.

It resonates strongly with the supernatural, and features a spooky art style with an interesting gameplay with different types of currencies that you will find useful throughout the game!

As expected, solitaire gameplay elements, as suggested in the name of the game, takes center stage in this game! However, Jewel Match: Twilight Solitaire does come with a slight variation, and rules are a bit different here.

What do we mean by that? Well, the most important thing to match are the numbers, and not the type of card (hearts/diamonds/clubs/spades). You will need to match these cards to the deck of cards that you have at the bottom of the screen.

The game is also not "punishing" if you are unable to clear the whole board. If this happens, you simply get a low score, but you can progress with the story. You will still get to replay any unlocked stage as many times as you want to get a higher score.

The developers of the game has also thrown in some "obstacle" cards as a special trick up its sleeves! These cards are either straight up obstacles, or normal cards which have a certain requirement to be fulfilled before you can use them.

For example, if a card is locked, you must find the key to unlock it. If it is frozen, you have to use it twice (which, incidentally, is handy for combos, so you can also think of it as a power up).If there's a ribbon, you have to find scissor cards.

These variations to the gameplay really differentiates it from other solitaire games, and adds a depth of strategy too!

True to its name, Jewel Match: Twilight Solitaire has an art style that is attuned for a good spook. It features lots of vampires, ghosts, and creepy manors and other desolate places.

The face cards (King, Queen, Jack) are depicted as Victorian-era vampires, with hints of opulence emanating from their regal expressions as well as their clothes. The Ace cards are also changed to fit the theme, with blood dripping from some of them.

In this game, there is also a section where you get to build your own dark manor, using the coins and points you gain from playing and clearing solitaire boards. While the assets are 2D, there is still plenty of detail for you to enjoy in this game, and the developers have incorporated certain illusory tricks that designed to make some scenes appear in 3D!

While it may get a little creepy or spooky with all the blood and vampiric scenes, we found that it was done tastefully and highly aesthetically appealing. 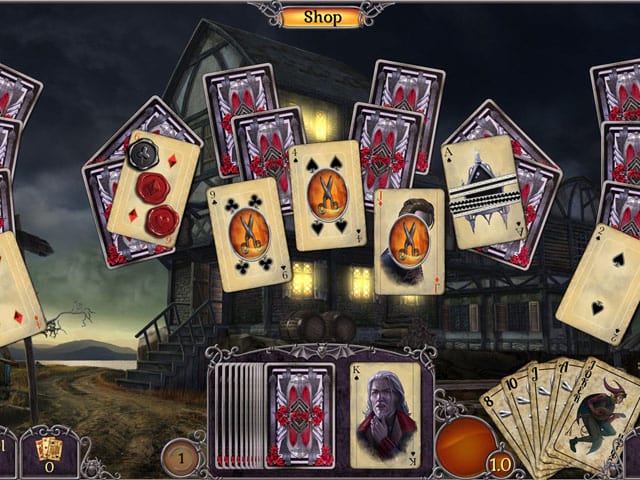 Three types of currencies to earn!

As you beat stages and clear solitaire game boards, you earn points that are transformed into coins, which is one of the three types of currencies that you can find in the game. Coins are used to buy power ups, which comes in handy when you are dealt with a rough hand.

For example, you can buy the powerful Joker cards that can be used whenever you wish, allowing you to make matches that you otherwise could not have made. Or, you can buy permanent upgrades, like the ability to undo a move, or even to passively gain the Joker cards without having to buy them each time you use them.

Of course, the more powerful the upgrade, the more it will cost you! Earn more coins and unlock more bonuses that will help you.

Now, let's talk about the second type of currency: the red gems. As you play and progress along in the game, you may notice that some cards have red gems behind them. These gems are used to build new rooms and upgrades for your manor, and you get them by clearing the cards covering them, and NOT by simply beating the level.

This can significantly change how you strategize the way you play the game, because simply beating the level does not mean you will earn lots of red gems! If you feel like you might not succeed in clearing all the cards in the solitaire board, you might want to prioritize only clearing the cards with gems. While this means you will get a lower score and thus fewer coins, at least you will get more red gems.

As for the third currency, the game features stars. This is awarded when you perform exceptionally well in any given stage, and are used to unlock bonus mahjong levels! 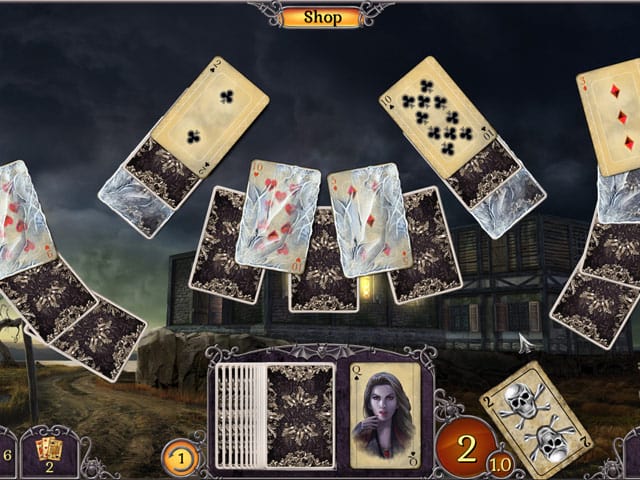 This wonderful solitaire game is one that is given an additional depth of strategization, as it comes with 3 different types of currencies that you have to manage. You can also build up your very own mysterious manor and customize it however you like!

With such an interesting take on the solitaire genre as well as powerful abilities and beautiful customizations, this is a solitaire game that we can get behind and fully recommend. Like every other game we have on GameTop, Jewel Match: Twilight Solitaire is absolutely free, so try it now!

If you enjoy these free games, you will love this list of our 10 Best Horror Hidden Object Games!