Build your ultimate empire in Travian Kingdoms, one of the best MMO strategy games that takes place in an ancient world. 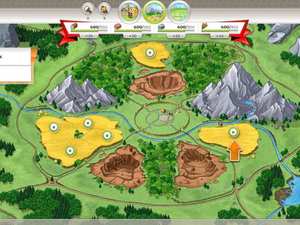 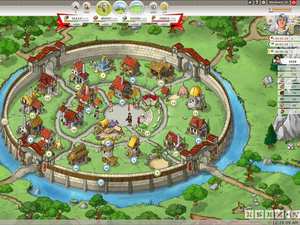 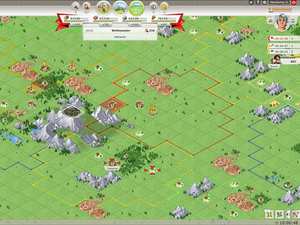 As a leader of a local tribe in this travian game, rule over your kingdom as you gather resources, collect tributes, upgrade villages, recruit a mighty army for raids and battles. To win, survive long enough and conquer the seven Wonder of the world. Dominate the world of Travian and experience the glory now!

Start with a small, undeveloped village with undeveloped resource fields such as the woodcutter for the production of wood, clay pit, iron mine, and cropland for crops. Each of these resources are used in leveling buildings, troop training, or food to feed your population with. They can also be leveled up to increase its production output.

Develop the village by constructing new buildings and upgrading existing ones. Slowly turn your village into a City so as to increase the population of the village, offering higher building and resource levels.

Infrastructure buildings generally improve your resource capacity, generation, and efficiency. For example, buildings such as the warehouse help you with storing resources such as wood, iron, and clay. There are also infrastructure buildings such as the treasury that generates influence, the embassy for diplomatic relations, a marketplace for resource trading with other players, and the Townhall for culture points necessary to conquer new villages. Take note that some buildings like the stonemason lodge can only be built at the capital (proclaimed by building the palace there!).

Training military units allows you to attack other villages or oases, plunder their resources, and defend from enemy attacks. Therefore, do not neglect military buildings in this game because they improve weapons and armors, troop stats such as the stamina, unlocking and training of stronger troop types, and more. One of the most important buildings is the Academy because it is responsible for researching and unlocking almost all unit types which will then be available for training in the Stable (for cavalry) and Workshop (for rams and catapults). To make better-enhanced weapons or armors, you will need the Smithy!

Resource buildings are responsible for processing the raw resources required for everything in the game (from units to buildings). Basically, the Iron Foundry is the place where iron is melted, Grain Mill turns grain into flour, Bakery takes the flour and makes it into bread, Brickyard processes clay into bricks. Upgrading the level of these buildings improves their production.

The Wonder of the World building is an end game content and building required to gain victory points to win the game. It will never be achievable by a single player or maybe a single alliance due to the number of resources required and the number of troops needed to protect them. To support this goal, there are other wonders of the world buildings such as the Natar Wall for higher defense and Greater buildings to store even more crops and resources.

Choose to be king or governor

In this strategy game, you can either crown yourself king or join another kingdom as a governor, it is your choice but both have their own advantages and disadvantages. Choose to be king if you are more military advanced and active, or the governor if you have put greater emphasis on developing your economy. The king has a higher activity level and has to protect governors while receiving tributes (resources) for doing so. As a king, your sphere of influence depends on the population size of your villages with an active treasury. You can start a new village to expand your kingdom once your village has a stronger influence than that of a neighboring king or to invite a governor to join your kingdom. If you are a trusted governor, you may be promoted to the rank of Duke that has almost identical rights to the kings.

Because the game cannot be won alone, Kingdoms have to join forces by forming an alliance on the same server. In an alliance, there will be 3 chosen kings and the other members of the kingdoms will automatically be governors or dukes. All kings and governors have to be in the same cardinal direction to have good odds to spawn into one of the kingdoms.

If you do not spawn in one of the kingdoms, you may have to find a secret society so as to further protect yourself and make use of shared chat and settle safely in your second village.

Choose carefully as tribes affect all stats of your units such as Merchant speed, Troop training, and more! The Gauls are better in speed so they can trade or move troops faster, but have very expensive sieges. The Romans have stronger wall defense but slower and more expensive troops. The Teutons have better merchant capacity and troop training but have a higher crop consumption. Each of these tribes also has its own additional special benefits such as faster chieftain and mounted hero for Gauls, extra construction slot for Romans, and 20% cranny dip for Teutons. There are also the computer or NPC tribes such as Nature or Natars that can be used as a defense in your village. They can defend some of the crop fields and the wonders of the world.