Play as a medieval powerful king in Goodgame Empire, a fun and epic time management game! Explore the empire game and expand your mighty kingdom through trading, exploiting natural resources, or founding new cities. Set up farms to feed your people, build roads and mines to trade resources. Prove your worth as a powerful ruler! 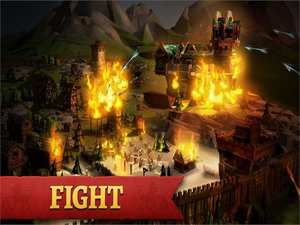 In this MMO great strategy game set in medieval times, you have been entrusted with your very own small castle. It's now up to you to expand it and turn it into a huge kingdom and empire! Prove your worth as a powerful ruler!

Embark on an adventure across four exciting kingdoms

Build your great empire by recruiting knights, archers, equipping your troops with deadly weapons, and sending them into battle to conquer new lands! Of course, you'll also need a solid defense - pick the right strategy to send the enemy's army running!

Be rewarded by achieving honor and glory in battle, and go from rags to riches by managing your kingdom wisely. Build your fortress from the ground up to become the most powerful. Produce resources and trade with other players to expand your mighty kingdom. More land means more subjects and characters - and more gold for you!

A medieval empire cannot exist without enemies. This is a time when empires are fighting for dominance, and gamers will be expected to take part in epic battles. Goodgame Empire features a strategic and versatile battle system and over 50 military units to use.

You can join forces with other player(s) to defeat your enemies and conquer new lands together! Help each other by sending resources or troops, or rebuild after enemy attacks.

Goodgame Empire is a deep and profound time management / strategy game that is available to be played on your browser, absolutely free. This medieval strategy MMO transports you back to an age when power was everything and only the strongest survived. Prove that you've got what it takes to be the mightiest and most honorable king in all the land! Build and rule your own empire, conquer land, amass money and treasure while defending your riches against enemy attacks. Building a powerful army will let you forge alliances and gain a great empire! Vanquish your enemies and be the most powerful king in Goodgame Empire now!

Read our detailed review of Goodgame Empire and learn what this awesome game has in store for you!

We also have a comprehensive list of the Best Time Management Games!